Thursday started like any other day, but ended like no thursday before it. Taking the dog out at night is my job seven days a week. So when Mommy Moneybags(MM) randomly decided to relieve me of that duty Thursday night, I should have been suspicious. I was not. Maybe it was the wine, or maybe it was the merciless beating I was giving her in gin rummy. When I began to wonder what was taking her so long I heard our dog bark, then yelp, then whine. I jumped up from my seat and hurried to the door fist clenched and prepared to defend my woman. I was panicking a little. I always trust my dog to protect my family when I’m not around. He’s a 80 pound pit bull mix with the bark of a lion. Yes, I understand lions are cats but I’m trying to paint a picture here. He’s a wild animal. An untammed beast. Something or someone outside had reduced him to a squirrel. As soon as I reached the door a tall shadowy figure emerged. The first thing I noticed were his weapons. Numerous metallic canes tucked behind him in a bag. He also carried another bag that he dragged behind him on wheels. Similar to a rolling suitcase. Exactly like a rolling suitcase. It was a rolling suitcase. Then I saw his face. The evil smirking face of my best friend, Doc. At that point everything became a blur of shock and confusion. I stood there with my mouth open babbling trying to make sense of why he was at my front door at 10PM on a Thursday 500 miles from home. Before my brain could put together anything close to an intelligent sentence MM handed me an envelope. It was an early Father’s day card. Inside was a golf resort reservation confirmation. Tucked behind that was a golf reservation for Saturday, and behind that a reservation for Sunday. All for two.  MM and Doc were in cahoots! The following morning she sent us on our way with my favorite spirit and a smile. Happy (early) Father’s day indeed!

I keep asking her why she did this for me? Why is she so damn good to me? I would have been happy with a tie. A nice lunch. A pan of her moist delicious banana bread would have been sufficient. Her response has remained the same, “because you deserve it.” This is my wife. She’s smart, kind, she’s completely selfless.  The only one she seems more devoted to than me is our son. And she can bake a mean banana bread! My chick is bad! We may not have the most money, or toughest dogs, and certainly nothing resembling a cool active social life, but we have each other. I have her. I can’t imagine a life better than this one.

This past weekend I didn’t change Donny’s diapers. Not once, for three whole days. I didn’t mix up a bottle, I didn’t clean up a mess, and the only clothes I changed were my own. I did play golf, poorly. I also ate my food while it was hot, drove fast, and drank too much for three whole days. Last weekend I was not living the Dadlife. I was living the fun irresponsible life of my 20s. I imagine there’s some Dad out there reading this and wondering how this Dad could be so lucky. It’s actually really simple; marry the greatest wife in the world. 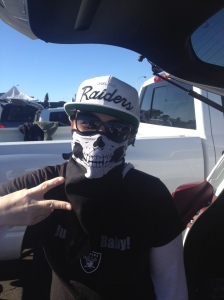 Thank you very much for stopping by. This is the third and completely unplanned edition of Daddy Day By Day. I’ll try to have another one out for Father’s Day but it might be little late. If you have any questions, rants, feelings, anything positive, please feel free to email me at daddydaybyday@gmail.com or simply comment below. Talk to you soon…

3 thoughts on “My Chick Bad”

My Tweets
Follow Daddy • Day • By • Day on WordPress.com
Join 88 other followers