I snapped today. I completely lost control. My blood pressure was through the roof and before I could get ahold of myself my hands were firmly placed on the shoulders of a 18 month old. My teeth were clenched and my eyes were like dark daggers piercing into his young soul. The child’s father applied a chokehold around my neck as the baby gym workers all crowded around imploring me, begging me to release the little boy.

Maybe I should start at the beginning.

The new trendy way to separate parents from their hard-earned money are kiddie gyms. This place in-particular is called, My Gym. My 10 month old has a personal trainer. They have fitness classes for children as young as 6 weeks. 6 weeks! Ludicrous if you ask me. At that age Donny’s neck was still weak and floppy like a bobblehead doll. Yet there I was sitting on their soft new carpet watching my son cling to a squishy blue ball for dear life. Around us, there were four or five other children. All but one was older than Donny. They were running, screaming, climbing walls, and just having fun. Donny stared at them, surely wondering what fun it must be to be a big kid. The cool kind of big kid. Not the one with back pain and a mortgage. Then one of them approached. He ran at us actually. As he quickly closed in on us my heart rate picked up, I started to fidget. Even tremble a little with excitement. This was going to be Donny’s first friend. I started daydreaming of them playing little league baseball together. Chasing down the ice cream truck on their bikes. Posing for pictures with their prom dates on the front lawn in front of a gray-haired Mommy Moneybags(MM) and myself. When the little boy reached us he extended his hand to Donny. “What a nice boy,” I thought. “So well-mannered and…HEY!” He just stole the ball from my son! And now he’s running away! Donny and I sat there stunned. Donny stared at me waiting for me to do something. I’m Daddy. I’m suppose to be all-powerful. My innocent and misinformed son sees me as the king of the world. Someone had just stolen something from the prince. I had two options. 1. Get him another ball. Probably an inferior ball. Not as soft and blue. It had to be a blue ball to match his eyes. He’s a flirt like that. Or 2. March over there and crudely snatch the blue ball back. From a 18 month old, or maybe he was 2. Heck, maybe he was 3. I can’t tell these days because Donny is so much bigger than most 10 month olds. Before I could figure out what to do the boys parents returned with the blue ball, an apology, and that boy dragging his feet behind them. I accepted the apology and Donny was happy once again. Minutes later that boy returned. This time it was a sneak attack from behind. He crept up out of nowhere. Quickly flying around my shoulder and plopping down in front of Donny. He snatched the blue ball again. “You little motherf…” I thought. But this time his parents descended on him immediately. Reprimanding him and explaining that you can’t just take things from other people (looking at you, Putin). Once again Donny seemed content to just sit there with his blue ball. The other child ran around with an orange one. Both kids seemed satisfied with their current toys so I began to daydream again, this time about lunch. A salad? In-N-Out? I was so deep into my thoughts of an midafternoon stack of pancakes that I never saw that boy approaching. He snuck up slow and quiet, like a thieving little samurai. The orange ball still in hand. Optimistically I thought he had come over to propose a trade. A chance for me to teach Donny a quick lesson on bartering. That was not the case. One ball wasn’t enough for the child. He wanted to horde. As he grasped onto the blue ball that Donny held onto so tightly, I snapped. So here we are, my hands firmly shaking this bully’s shoulders, his father’s arms around my neck, the trainers pleading with me to release the poor child. Everything started to go black as my brain struggled for oxygen. All I could hear was, “BILLY NO”. My extreme hunger combined with general fatherhood exhaustion had my mind playin` tricks on me. In reality, as soon as Billy touched the blue ball his mother and father we’re on each side of him to correct his behavior. Confrontation averted. It was time to go and get something to eat. 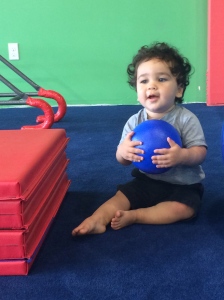 I think I’ve said this before, my goal as a father is to raise a child that is happy. I’m also trying to raise Donny to be a positive influence on his environment and the world as a whole. No one person is too small. But I wonder if there is such a thing as a bad seed? A born problem child? Or is it all on the parents and the decisions they make while raising the child. The easy answer is yes. However, I’m learning that there is no such thing as “easy” when it comes to raising a child. And I’m only at the baby stage! I think Billy’s parents are great. They allow him to roam and be a kid but are quick to correct and guide him every time he does something they don’t approve of. Uncle Ben once told Peter Parker,

Donny is a big kid. He’ll probably be bigger then most kids his age. If I don’t lead him in the right way he could develop bully tendencies. And under the right circumstances, that could be bad for everyone…still looking at you, Putin.

Thank you very much for stopping by. This is the sixth edition of Daddy Day By Day. If you have any questions, rants, feelings, anything positive, please feel free to email me at daddydaybyday@gmail.com or simply comment below. Please click on one of the two “follow my blog” links on the right. For you mobile users the links are at the bottom of the page. I promise to try to keep you entertained to the very best of my abilities. Talk to you soon…

My Tweets
Follow Daddy • Day • By • Day on WordPress.com